Reaching across the partisan divide, Whitehouse and Schatz unveiled their “American Opportunity Carbon Fee Act”[ii] at a packed event hosted by the conservative American Enterprise Institute on July 26th.[iii] They touted both the climate benefits of a carbon price and the fiscal allure of $2.1 trillion in revenue that AOCFA would reap over a decade. The bill proposes to fund cuts in corporate income tax rates, rebate a portion of payroll taxes, fund a Social Security supplement for retirees, and provides block grants for states to help low-income and rural households and workers transitioning to new industries. At least from a revenue perspective, the bill represents an olive branch to conservatives and business interests who seek to reduce corporate tax rates, while also protecting low- and middle-income households from disproportionate impacts.

AOCFA is elegant, concise and easily-understood. It’s an upstream excise tax on the carbon content of fossil fuels, the simplest and most direct way to begin to correct the market distortion that now omits the present[iv] and future costs of climate pollution from fossil fuel prices, making them seem cheaper than they really are. The tax would start at $49/T CO2 and rise 2%/year above inflation.

Unfortunately, 2%/year is not nearly enough to continue driving down CO2 emissions after the initial effects of the tax ripple through the economy. Two percent is about the expected annual rate of economic growth in the U.S.[v] Although the U.S. economy is slowly becoming less carbon-intensive, it’s still a fair guess that 2% economic growth will lead to roughly 2% annual increases energy demand for many more years. In short, even if similar carbon pricing trajectories were adopted globally, AOCFA’s 2% price trajectory is far too anemic to achieve even the most modest climate goals and is nowhere near aggressive enough to avert catastrophe.

But despair not! There’s a relatively easy fix for AOCFA. A recent analysis by the World Bank’s High-Level Commission on Carbon Prices offered the results of six different integrated assessment models in three scenarios[vi]. In order to meet the goal of holding global temperature rise under 2 degrees Celsius, the models suggest that a carbon price will need to rise to roughly $500/ton CO2 by 2050. An upward ramp of 7%/yr would get us there just in time. The plots below tell the story. 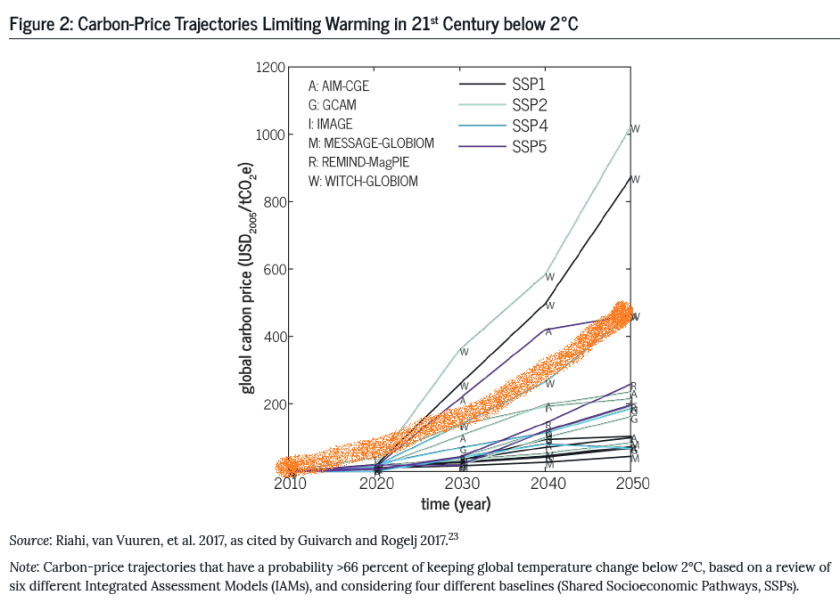 As you can see, if AOCFA’s price ramp were increased to 7%/year, carbon prices would reach the mid-range of the climate models’ price projections, roughly $500/ton CO2 by 2050, indicated by the orange curve. Hence, the 7% solution![vii] Upgrade AOCFA’s anemic 2% annual increment to a more robust 7%, then we’d be looking at serious climate policy, offering a ~50% chance of averting catastrophe.